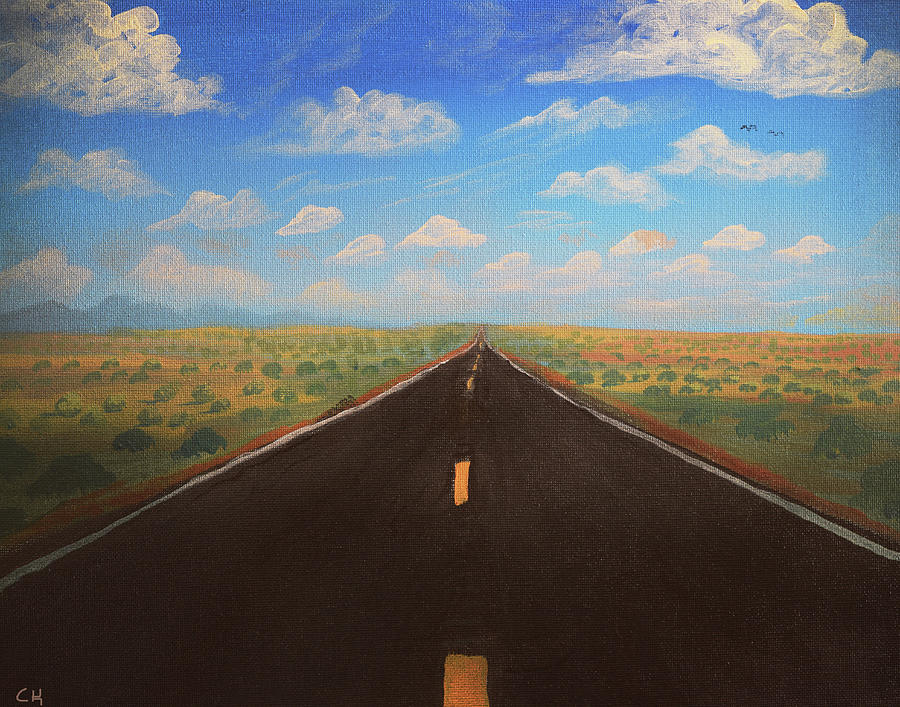 This piece has been already sold.   Please feel free to contact the artist directly regarding this or other pieces.

Inspired by a recent trip to the high desert of Northern Arizona, I have painted State Highway 77 as it travels southbound on a remote flat stretch between the communities of Holbrook and Show Low in Navajo County. Puffy white clouds float through a deep blue sky as dust from recent winds slightly obscures the hazy outline of the White Mountains. Sunlight and shadows play on the landscape, which is dotted by sagebrush and juniper shrubs. I included a bit of a vignette effect and birds in the sky, of course.

The Little Colorado River crosses this highland, sometimes referred to as the Painted Desert. Far away from the bustling metros of Tucson and Phoenix, northeastern Arizona is an arid, sparsely populated region with miles and miles of wide open road and vistas, ringed by forested mountains, canyons, and cliffs. This particular stretch was fun to drive, as even though the landscape is mostly flat, the feeling of solitude and desolation is fairly unmistakable compared to more populous regions of the state. The desert stretched for as long as the eye could see in all directions, only interrupted by distant mountains or mesas common to the American Southwest.

State Route 77 happens to be in decent repair in this area and lightly traveled. The highway actually begins in a remote section of the Navajo Nation Indian Reservation north of Holbrook, follows I-40 for a bit, and continues south to Show Low and eventually through Salt River Canyon joined with US Highway 60. It continues southward through the rural mining communities of Globe, Winkleman, Dudleyville, eventually swinging west through Oracle, then south past Catalina and Oro Valley into metro Tucson where it ends. It is often said to be one of the more scenic state highways in Arizona with wild elevation changes, sweeping plateaus and ascents and descents through canyons and various mountain passes. It is interesting to think that this same designated highway, seemingly in the middle of nowhere, terminates in the heart of a commercial district in Tucson as Oracle Rd, one of northwest Tucson's busiest roads, some 220 miles away.

This is really cool work

I love not knowing where we are going