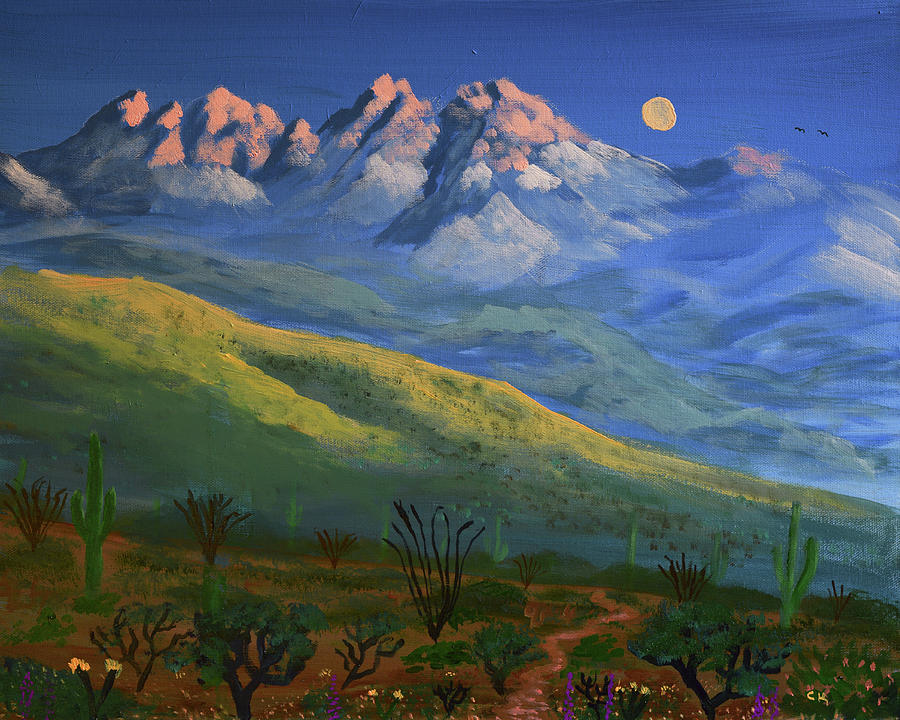 This original painting is currently for sale.   At the present time, originals are not offered for sale through the Chance Kafka - Artist Website secure checkout system.   Please contact the artist directly to inquire about purchasing this original.

The Four Peaks of the Mazaztal Mountains in central Arizona are seen at last light, dusted with some late-winter snow as a nearly full moon rises over a ridge in the peaks. Near sunset, radiant sunlight strikes the rocky peaks and illuminates the dramatic foothills as the foreground is already in shadow.

Browns peak is the highest mountain in this range is the most prominent mountain in the Phoenix Metropolitan area, particularly parts of Scottsdale, Mesa, and Apache Junction. As part of the Tonto National Forest and wilderness areas, the Four Peaks anchor a transition zone of geography unlike any other in the American Southwest. To the southeast and east of the peaks lie rugged mountains and canyons, lakes and rivers, sprinkled with ghostly mines (and many still operating). To the north, the landscape gives away to the scrubby Mogollon Rim and eventually the high country, plateaus and peaks of Northern Arizona. And to the west, it is ringed by the vast Sonoran Desert, famous for its saguaro cacti, intense summers and the Valley of the Sun - by far the most populous area of the American Southwest.

In this painterly landscape, we can see the transition from warm desert floor, where spring has already begun and golden poppies and lavender blooms are even appearing, clear to the frosty snowy peaks. I also included an inviting trail, as this wilderness area is incredibly popular for hiking. The Four Peaks are the best chance that Phoenicians will ever have at viewing snow, as the highest points are several thousand feet higher than the highest parts of the city, and Phoenix almost never gets snow.

It is my hope my impressionistic style resonates with you, and you can feel the beauty of these southwest desert landscapes. Thanks for checking out my work - I am confident prints will make the make perfect addition for you home, office or interior design project.

Chance ~ a beautiful painting and an effective illusion of distance : )

Congratulations your stunning work has been featured in the Fine Art America aRt dIstRiCt! Bravo!

Thank you for the continuing wonderful comments.

Beautiful painting! Love the lighting in your pieces!

The light, the color, not to mention the moon and the two birds...sweet!

Chance, Awesome work!! and Congratulations!! Your work has been featured on the Home Page of Weekly Fun for All Mediums!!

Fabulous lighting on this gorgeous painting!