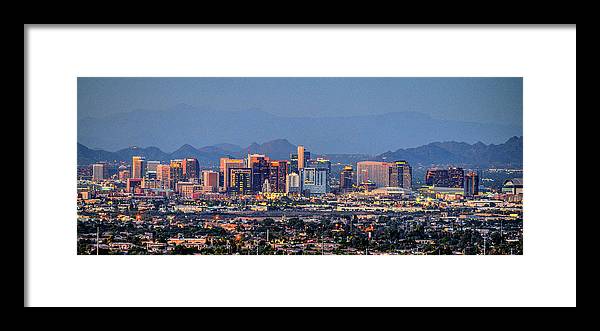 Phoenix Skyline Dusk framed print by Chance Kafka.   Bring your print to life with hundreds of different frame and mat combinations. Our framed prints are assembled, packaged, and shipped by our expert framing staff and delivered "ready to hang" with pre-attached hanging wire, mounting hooks, and nails.

This winter view at dusk from South Mountain affords a panoramic view of the skyline of Phoenix, Arizona, including downtown and its buildings and... more

Chance, absolutely gorgeous panorama of Phoenix! Love the dynamic transition between sunset and night. The colors, lighting on the buildings and complementing mountains in the background are captured perfectly! F/L

Thanks so much, Brian!

Thank you very much!

This winter view at dusk from South Mountain affords a panoramic view of the skyline of Phoenix, Arizona, including downtown and its buildings and skyscrapers, Sky Harbor International Airport, the Phoenix Mountains (preserves), and so many other noticeable landmarks. Phoenix, as the capital city of Arizona, is the largest city in the state and American Southwest. Its sprawling metropolitan area which includes Tempe and Scottsdale, Mesa, Chandler, and Glendale, among other cities, comprise a majority of the state's population. The other major metro of Arizona, Tucson (where I live) has only a quarter of the people in its area.

Tucson based photographer and artist Chance Kafka is a native of Laramie, Wyoming, and grew up in the small community of Wheatland, before returning to Laramie for college. He took an interest into photography at a young age, photographing clouds, sunsets, and landscapes. At age 17, he won 1st Place in the Platte County Fair photography competition in 3 out of 5 categories as the only entrant to win more than one category. Following this local success, he worked as a feature writer and photographer for the Platte County Record Times while still in high school. His articles and feature photos garnered him acclaim across the region which inspired him to pursue journalism as a degree in college. Chance served as a teaching assistant for a...