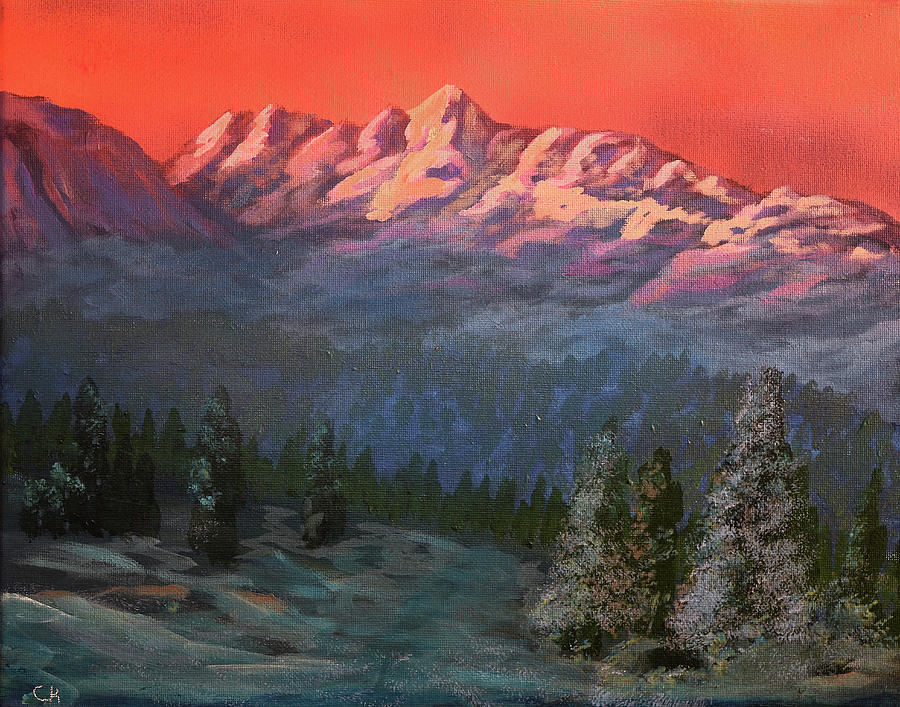 Original - Not For Sale

This piece is not for sale.   Please feel free to contact the artist directly regarding this or other pieces.

Snow-capped Wilson Peak is featured at sunrise rising above the rugged San Juan of southwestern Colorado on a blistery, peaceful winter morning near Christmas. One of the most southerly expanses of the North American Rocky Mountain chains, these peaks contain several "Fourteeners", or peaks that rise to an elevation of over 14,000 feet, including Mount Wilson and El Diente Peak. This section of the western San Juans is also referred to as the San Miguel Mountains and is particularly revered in the ski-haven mountain town of Telluride. Nearby Durango is a tourist gateway and transition zone between the American Southwest and the Rocky Mountains of the American West.

I included a clearing that could be a ski run, with many fir and pine trees dusted with snow on the slopes in the foreground, where only the first light of day has so far struck the high peaks. That is one of my favorite times at sunrise or sunset, when only the highest peaks are illuminated. Brilliant deep red and orange clouds serve as a backdrop, a very common phenomena at high elevations during golden hour. If you stop to look at clouds at sunrise or sunset and are at a low elevation, you will see that the deep red and orange clouds are often high in the sky. The higher you go, the closer you are, until you are "in them" as seen here in these Colorado Rocky Mountains.

I have never been to the San Juan Mountains. I occasionally paint places I have not been. This painting was inspired as a gift to a friend in Tucson who is leaving to Colorado. Wilson Peak is his favorite mountain in the whole state. I hope to visit this area in the future and other ranges in the southern Rocky Mountains.

Back with a beautiful creation! Glad you found the time to share it.